On July 24, 2018, members of the Tribal Budget Formulation Workgroup (TBFWG) met with members of the congressional Indian Health Service (IHS) Task Force. TBFWG is made up of Tribal representatives from each IHS Service Area to develop the national Tribal recommendations for the annual IHS budget. Each year, the Workgroup synthesizes the priorities identified by the Tribes in each of the Areas of the IHS into a cohesive message outlining Tribal funding priorities nationally.

The Congressional IHS Task Force was founded in 2017 to examine legislative solutions to the quality of care concerns IHS has experienced in the Great Plains and other Areas. It has been meeting with Tribes, Tribal leaders, technical experts, and intertribal organizations to gather information on ways to improve the IHS’ ability to provide quality healthcare to American Indians and Alaska Natives. Members present included Co-chairs Markwayne Mullin (R-OK) and Raul Ruiz (D-CA), as well as Reps. Betty McCollum (D-MN) and Frank Pallone (D-NJ).

At the July 24 meeting, members of the TBFWG advocated for moving the IHS budget into mandatory funding, similar to Social Security or Medicare, which do not need congressional Appropriations year to year. Mandatory funding would allow IHS to operate with certainty and stability. The Work Group also explored options to bring full funding for IHS into effect, including the enactment of the Work Group’s recommendation for a 12-year phase in, beginning in Fiscal Year 2019. 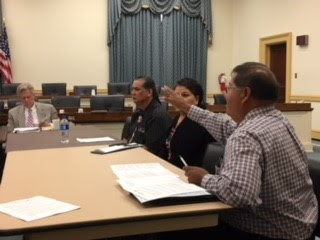 The Members of the IHS Task Force were particularly interested in discussing how Congress would determine the formula for funding IHS under mandatory spending. The members also promised to work to ensure that Tribal healthcare needs are included in any national infrastructure bill Congress proposes. Specifically, housing and workforce development challenges make provider retention at IHS a difficult task.

Members of the IHS Task Force are interested in exploring these issues further. They are particularly interested in ways in which IHS funding lapses increases costs for Tribes. One example came up in the meeting: Tribes in Alaska must purchase diesel for electric generators during a specific time of year when the rivers are navigable; if they do not, diesel must be flown in small planes, increasing costs enormously.

If your Tribe has had an experience where lack of funding has led to inefficiency and increased costs, please contact NIHB Congressional Relations Coordinator Brett Weber, at bweber@nihb.org.