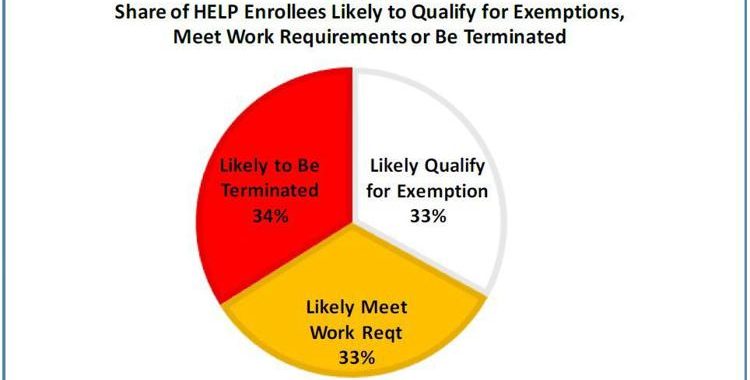 Study: 1 in 3 Montanans under Medicaid expansion would lose coverage with GOP work requirements

An independent analysis estimates about 26,000 to 36,000 low-income adults would lose coverage under Medicaid expansion in Montana if proposed work requirements are put in place.

That’s according to a report on the potential effects of work requirements from George Washington University’s Center for Health Policy Research at the Milken Institute School of Public Health in Washington, D.C.

The analysis, written by Leighton Ku and Erin Brantley and released Wednesday, is based on the draft of Republican Rep. Ed Buttrey’s bill from Feb. 5.

Montana first passed Medicaid expansion in 2015 with a bill carried by Buttrey called the Montana Health and Economic Livelihood Partnership (HELP) Act. About 95,000 people are covered under the program, which is set to expire at the end of this year unless lawmakers continue it. HELP also includes a voluntary workforce program both Republicans and Democrats have said is successful.

Buttrey’s bill this session, called the Medicaid Reform and Integrity Act (MeRIA), includes what is called a “community engagement” provision.

That is an 80-hour monthly requirement that can be met with activities like work or, for those who can’t work, volunteering, seeking a job, substance use disorder treatment or training.

The requirements are similar to what the state of Arkansas enacted for its Medicaid expansion program last June.

The assumptions the university’s analysis made about a work requirement in Montana were based on Arkansas’ experience, as well as the work requirements for the Supplemental Nutrition Assistance Program, the food stamp replacement program known as SNAP.

After Arkansas implemented work requirements in June last year, about 18,000 had lost coverage by December. About 252,642 people were covered, meaning about 7 percent lost coverage in the first six months.

Buttrey has said his bill isn’t modeled on Arkansas’ version. It has a similar hours requirement, however. Buttrey also cautioned that his draft is subject to change before it’s finalized. It has yet to be introduced.

“We certainly don’t want to put (on) an hour requirement that is punitive,” Buttrey said earlier this month. “I’m not trying to do something that’s going to cause enrollment numbers to drastically change.”

On Wednesday, Buttrey said his bill has gone through several changes, based on input from a variety of parties, since the Feb. 5 draft, and that the study done on the bill was flawed because it’s based on out-of-date information. He did not clarify how the bill has changed from the early draft.

The report was paid for in part by the Montana Healthcare Foundation, which has supported the continuation of Medicaid expansion.

“They wasted their money, some of it anyway,” Buttrey said of the cost of producing the study.

The analysis estimates the requirement proposed in Montana would cause about a third of those covered under expansion to lose coverage. Another third are expected to qualify for an exemption from the requirement and a final third are projected to meet the work requirement.

The analysis found several barriers to meeting work requirements, such as people who do seasonal work not meeting the 20-hour-a-week requirement and lack of job opportunities in rural parts of the state. Spotty internet access could also make reporting on performance of the work requirements difficult.

The draft bill also includes increased premiums for people enrolled in the program more than two years, with a cap at 5 percent of income. That’s something else the analysis says could lead to an additional 9 percent drop in coverage, or about 5,000 to 7,000 people.

Ku said based on the early draft he saw, Montana’s work requirement program is stricter than Arkansas’, which is why he predicts a greater percentage of people would lose coverage. For example Montana would exempt full-time caregivers for children ages 6 and younger, while Arkansas exempts all parents and others living in a household with a minor child.

The Rocky Mountain Tribal Leadership Council, which represents the tribal leadership for Montana tribes, also issued a resolution Tuesday in opposition to work requirements. They said jobs are limited on reservation communities and the requirements would force many of the 15,000 Natives who are covered off care. The analysis estimates more than 3,000 Natives would lose coverage.

Democrats also have their own version of a bill to continue expansion, which does not include work requirements. Rep. Mary Caferro, a Democrat from Helena, said Wednesday the study “validates everything that we claimed about the impact of work requirements.”

Rep. Dennis Lenz, the Republican chair of the House Human Services Committee, said he plans to hold a hearing on both bills March 16.

Democrats have called for an earlier hearing of their bill, while Buttrey’s has not yet been introduced. Buttrey said he’d like to see if the bills could be heard earlier, on March 9. That’s the 48th day of the 90-day session and, Buttrey said, enough time to get the bill through the process.